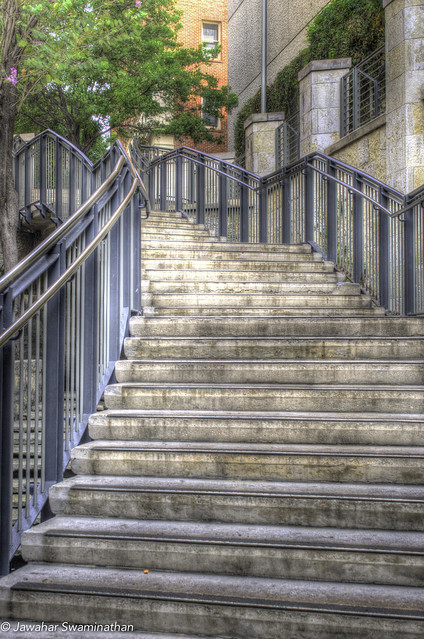 Steps on the River Walk, San Antonio. Please click on the photo for a larger version on Flickr.

HDR of a set of steps leading from the River Walk to the city above. San Antonio, Texas. Photos taken at -2, 0 and +2 stops, then merged and processed in Photomatix Pro.

Today saw the Montréal Canadiens on the ice for an optional skate at Complexe Sportif Bell in Brossard.

Alex Galchenyuk skated alone again as he continues to recover from a lower body injury. There is still no timeline for his actual return.

Coach Michel Therrien would only say for certain that Rene Bourque will be in the lineup tonight after being sidelined with flu symptoms on Monday. He did not affirm any other line changes.

However it does look like Travis Moen will step into Brandon…

The Montreal Canadiens return home tonight to the Bell Centre to face the Boston Bruins in game 3 of the Eastern Conference Semi-Finals.

The teams head into tonight’s contest tied at one game each, splitting the series in Boston.

Nobody said this series would be easy; the Bruins are a tough physical team who have been bombarding Carey Price with every shot they can get. The B’s have managed to get 86 shots on Price thus far compared to the 61 shots Rask has had to face.

According to the Bruins, they say they have solved the problem of how to beat Price.

« He gets really low, so it seems like we score a lot of goals up high when we have net front presence. I don’t know if we’re really trying to do that but we’ve definitely noticed that. When we can get…

I would like to first rejoice at the first round that we just witnessed over the past two weeks. I am sorry to say that after a first round of that nature, involving so much drama and intrigue, that I have my own reservations about whether or not round two will live up to its billing. Last night’s thrashings of the Pacers and Thunder seem to justify my stance. The other two juicy match ups in round two consist of the soon-to-be Eastern Conference champion Miami Heat and the pesky Brooklyn Nets. But, instead of getting caught up in that series (I believe Miami wins in 5), I would like to dive into the intriguing series that pins up the forever magnificent San Antonio Spurs and the Portland Trail Blazers who are led by DAMIAN LILLARD WHO OH MY GOD IS NOW A SUPERSTAR WHO ISN’T AFRAID OF ANYTHING ON…

How Portland Will Win
Portland had the best offense in the first round of the playoffs scoring 111.8 points per 100 possessions against a team that only allowed 104 points per 100 possessions during the regular season. LaMarcus cooled off some after a blistering start, but still averaged 30 points on 48% shooting, 11 rebounds, and 3 blocks on the series. Despite all of that, the reason the Blazers were able to take care of the Rockets in 6 games (besides the disappearing of James Harden) was Damian Lillard. In order for the Blazers to win in round 2, Lillard needs to finish around the rim the way he did in round 1 (50%), and not the way he did during the regular season (under 47%). It wouldn’t hurt to keep shooting 49% from 3 on almost 8 attempts per game either.

The Blazers’ ability to run the pick and…

BOSTON BRUINS vs MONTREAL CANADIENS: The series heads to Canada tied 1-1 after Montreal blew a 3-1 lead in Game 2 en route to a 5-3 loss. This series has featured everything you’d expect between these two teams; aggressive play, lots of hitting, cheap shots, mind games, and of course, quality hockey. Boston has already given up more goals in two games vs Montreal(7) than they did in their five-game series against Detroit(6). On one hand, Montreal has proven to be a significantly better team than Detroit. However, seven goals in just two games is not a good sign for a team that now has to travel to arguably the most hostile environment the NHL has to offer. Officiating in this game is going to be key. Montreal has recorded 37 PIM on the road during the post-season, compared to just 8 PIM on their home ice. GAME 3 PREDICTION: Canadiens…

Wow. What an incredible First Round. There were 5 seven game series. 5!

Who Wins: Pacers in 6 games

Who Wins: Heat in 6 games

Who Wins: Spurs in 7 games

Who Wins: Clippers in 7 games

The opening round of the 2014 NBA Playoffs may very well go down as the greatest ever. Breaking previous records, there were eight overtime games and 5 game sevens. The record for games sevens in an NBA Playoffs is eight. That alone shows you how intense these series were. The first round definitely spoiled NBA fans, there will most likely not be another round like that for a while, and certainly not in these playoffs.

Pacers-Hawks: This series was definitely the most surprising one of the playoffs. The Pacers ended the season on a bad note, and kept up their terrible play in the first round. The major issue with the Pacers right now is the atrocious play of All-Star Center Roy Hibbert. Hibbert leading up to Game 7 was averaging 4 points and 3 rebounds in the series. This allowed the Hawks to prolong the series to 7 games…

Aaron Parker: Around the Association

As promised, myself and the guys here at Standing Room Only give our picks and I break down the second round match-ups. But first, what a first round, am I right? The most game 7’s in first round playoff history with FIVE. Five series out of eight had to use every game to decide the winner. And who would’ve thought? For a lot of these teams some weaknesses were exposed to teams that should have been beaten in six at the most (cough* cough* ATLANTA). Now for the second round we have a little more understanding of certain things teams do well in a playoff setting. With that said let’s get this thing going! Reine is one of favourite and beautiful village in Lofoten. The village is really small and photogenic. The people really helpful. I took this picture some minute before i leaved Lofoten. The wind was really strong and coming from opposite direction from my camera. I attached GND 2 stop and big stopper in the front of my lens.. Luckily the wind stopped when i was press the shutter. Finally i got movement on the sky with dark cloud..
via 500px http://ift.tt/1krhGLY

The best coffee in Paris

Now, French socialist President François Hollande, already known for his quite strange so called « Humour corrézien », his hectic personal life including tea time visits to mistresses with a scooter, and vintage view of the world and economics, seems to have turned real crazy.

Running like Forrest Gump may be charming, but upside down is not normal, it’s … different, the least to say … or even … French …

A little more about it, in French, needless to say http://surlepouceparis.wordpress.com/2014/05/05/le-retournement-economique-maintenant/