In the fast-approaching future, when the drug-addled heir of a genetic-engineering company begins to investigate his company’s murky past, he discovers he is the catalyst in a terrifying global event that will transform him and forever alter the course of human evolution.

GMOs are a hotly debated topic today, especially about the science surrounding them. Boy-1 #1 seems to touch upon some of those issues. So, that got me rather intrigued as I read the comic, but the first issue unfortunately builds too much of a mystery and not quite enough of a pay-off.

Writer H.S. Tak kicks the series off focusing on a mystery and introducing us to the various characters in the comic. It mostly focuses on Jadas, the heir to a genetic-engineering company. He’s drug addicted, a bit of a screw up, and overall comes off as a rich punk. That’s part of the issue for this…

When my better half and I were on holiday in Cannes this year, after dinner we went back to our hotel room to sit on the balcony and enjoy what was going on below at street level as well as above in the sky.

On June 18, 2015, we saw something neither of us had ever witnessed: a disappearing new moon.

That day, incidentally, marked the beginning of Ramadan for some Muslims. As is true for Jews, certain feast days begin in one 24-hour period or the next, the Last Supper being one example. In any event, these periods of religious fasts or feasts are dictated by the moon’s movement.

Anyway, we sat watching the moon. I thought I was seeing things when, within five minutes, the crescent began approaching the horizon. Cautiously, I asked SpouseMouse who said, ‘It’s definitely going downward.’ Within another five minutes the moon was no…

Why Evolution Is True

This came through my CNN news feed, and it’s saddening.

Former President Jimmy Carter says, « Recent liver surgery revealed that I have cancer that now is in other parts of my body. »

Carter, 90, had a « small mass » removed from his liver earlier this month. At the time, he received a prognosis for a full recovery.

Carter said he will receive treatment at Emory University in Atlanta.

Say what you will about Carter’s presidency, what’s undeniable is that he had a good heart and, unlike many other former Presidents, has behaved in an altruistic and exemplary way since he left office. It looks as though his end is near, and I’ll miss him being around.

But, really, the man had criticized Kim’s reforestation policy. Some things just cannot be tolerated, you know:

In a statement carried by the agency, South Korea’s Unification Ministry said: « Choe has not been seen publicly for about … eight months since he was last witnessed in December last year at the ceremony to mark the third anniversary of the death of North’s former leader Kim Jong Il.

« The government is closely watching to see what might have happened to him. »

North Korea is suffering from a massive drought, and Kim evidently ordered… Ever since I was a small Timmy, I’ve loved trains. When you grow up near Britain’s biggest model train set, at Bekonscot Model Village in Beaconsfield, Buckinghamshire, it’s going to affect you in some way. As the son of a railway-loving chartered surveyor, and the grandson of  two grandfathers who built model trains, miniature railways, enjoyed gardening, and exploring weird and wonderful places, let’s be honest, it’s going to give you either a God complex or a size complex.

Me on my first visit to Bekonscot. I’m impatiently waiting for a train.

I pestered Bekonscot until they let me work there at the age of 12, having the best (or most Enid-Blyton-esque) job anybody could ever want. I controlled the model trains, I occasionally repainted or fixed the tiny figures and I built some model buildings. I made some life-long friends through my work there, through our shared love…

I first came to France twelve years ago during my junior year abroad. I was the first person in my family to get a passport and I could barely contain my excitement. In the winter of 2003, two years before the riots that followed the untimely deaths of 15 year old Zyed Benna and 17 year old Bouna Traore, I landed in Paris bright-eyed and bushy tailed, armed with a very shaky grasp of French and a naive fascination with this beautiful country.

As an African-American, I was vaguely aware that France did not deal with issues of race the way we do in the United States. And when I happened to forget, French white people were keen to remind me. In one of the sociology classes I took at a university in the south of France, I hesitantly raised my hand to ask a question. The white French professor had…

So remember that thing I applied for?

My application was successful.  I was selected to take part in a project at Scotland’s Craft Town,  the wonderful West Kilbride.   I’ve been a massive fan of the Craft Town since I first found out about it a few years ago, so I’m massively chuffed to be a part of it.  The project I’m involved in takes selected craft makers based in Scotland, at various stages of their careers and gives them specialist business mentoring and studio space for six months.   For the first time in over a decade I am being mentored rather than mentoring others, which has been quite a shock to the system.

The first meeting of the participants, organisers and business mentors involved an exercise where we had to think of things that limited our business or things that we were worried about and then we had to…

The Overspill: when there's more that I want to say 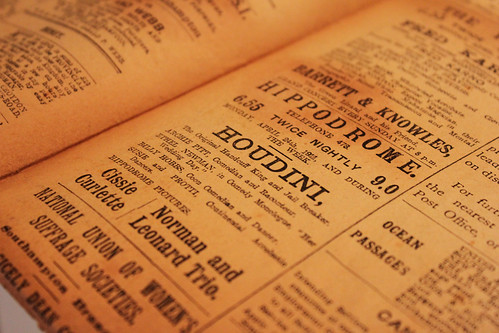 The thing about print adverts was that they stayed where they were. Photo by Bethan on Flickr.

TL:DR: when Apple’s iOS 9 comes out in September, there’s going to be a dramatic uptake of ad blockers on iOS – and it’s going to have far-reaching effects not just on websites and advertisers, but potentially also on the balance in mobile platforms and even on Google’s revenues.

In the old days, adverts appeared in print, on the radio and on the TV. Most ad-supported news organisations that have shifted to the internet began in print.

Ads in print were straightforward. Advertisers bought space, and editors could turn them down, or sometimes decide not to run them if a story broke that would bring about an awkward juxtaposition of, say, the advert for a shoe store on page 3 and the big breaking story now…

An old dug-out wooden canoe waited for me on the banks of Yorkin River. Two cowboy-like young boys, dressed in vests and gum boots, greeted me with wide smiles and is-be-shkena. Dusk was fast approaching, so I had little time to voice my apprehensions. For an hour, we manoeuvred rapids upriver with an old motor and a wooden stick, slowing down to a crawl at narrow bends, tilting almost 60 degrees when sharp rocks rose from the river bed, nothing but dense forests on either side. My pumping adrenalin washed off the nervousness of being somewhere so remote, alone, in a country I had set foot in only two days ago (Read: Costa Rica Wasn’t The Country I Imagined).

As night descended and finally on land, I lugged my backpack and followed my new friends into the home of the Bribris – one of the last remaining indigenous communities in Costa Rica…