When Zlatan Ibrahimovic was controversially red carded in the first half of Paris Saint-Germain and Chelsea’s Champions League second leg game Wednesday, it seemed like the Swedish striker had doomed the French club. PSG was able to keep Chelsea from scoring for the majority of an ugly game that more closely resembled a wrestling match, but Gary Cahill gave Chelsea goal, and a 2-1 lead on aggregate, with just nine minutes to play.

PSG needed a miracle, and former Chelsea centerback David Luiz delivered. Luiz climbed above two defenders and hit a bullet header into the top corner at the near post. Chelsea goalkeeper Thibaut Courtois didn’t even have time to move his feet.

With the tie leveled 2-2 on aggregate, with each team having scored an away goal, the game went to extra time. PSG’s Thiago Silva conceded a penalty in the 96th minute after jumping to… 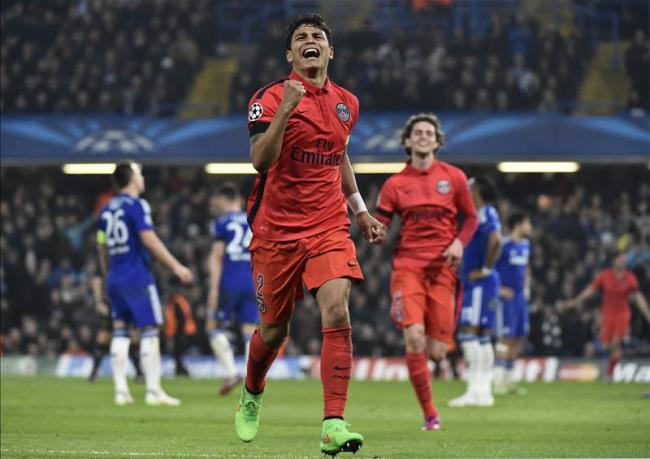 Chelsea crashed out of the Champions League as headers from Thiago Silva and David Luiz were enough to send PSG through despite a red card for Zlatan Ibrahimovic.

Chelsea welcomed back Nemanja Matic into the team in the place of Kurt Zouma with Willian left out in favour of Oscar and Ramires. PSG brought in Thiago Motta and Javier Pastore who both missed the first leg through injury.

The game had a cagey opening but both teams were clearly looking for goals, with Oscar particularly early on impressing at winning the ball back.

It was an astonishingly tight beginning to the game but Chelsea were playing at the quicker tempo especially when they broke with Eden Hazard finding plenty of joy down the left.

Blaise Matuidi was making plenty of brilliant runs but either his team-mates were failing to pick him out or he was caught off side.