The most interesting wearable technology on the court at this year’s US Open won’t be on the tennis players. While watching the US Open, keep an eye on the ball boys and girls — those young people chasing errant balls around the court — wearing skintight black Ralph Lauren shirts. Those shirts are wirelessly connected and they are packing some very cool wearable technology from OMsignal, which provides the capability to take readings of the various ball boys’ heart rate, breathing levels, and movement.

As can be expected from a preppy haberdasher like Ralph Lauren, the black form-fitting compression shirts do look good, especially on the male models and in-shape ball boys currently testing them out. Below the big Polo logo lies the OMsignal technology: a band of specialized fabric around the wearer’s midsection which has silver sensor threads woven through it and includes three ECG leads.

The band of sensors works in conjunction with a small…

Ryu finished with a 23-under par 265, breaking the tournament record of 18 under but not threatening Annika Sorenstam’s LPGA Tour record of 27 under.

The 24-year-old Ryu started Sunday’s final round with a four-shot lead that evaporated to one when she bogied the 15th hole and Choi birdied.

That was as close as it would get, as Ryu sank a birdie putt on No. 16 and beat Choi by two strokes to capture her first title since the 2012 Jamie Farr Toledo Classic.

Ryu, the No. 9 player in the world, had 26 birdies and just three bogeys as she became the first wire-to-wire winner at this event since Michelle Wie in 2010.

The Springboks came back from 28-16 down with 20 minutes to go to win 33-31 against Argentina on Saturday in Salta. This was mainly due to the impact the bench made late in the game. Many hailed it to be a well deserved win by the Springboks.

Although we all know that it is not easy to go to Argentina and just came back with a win, especially these days, it was still a closer game than the Springboks expected. Overall the Springboks have won 18 tests against Los Pumas and one test was drawn. This is at an average of 39-19. That puts the 33-31 score a bit more into perspective.

“I’ve said it before, but I really think Argentina is a much better team than what their world-ranking shows, and they showed it again today,” said De Villiers after the match.

Sonny Bill Williams is possibly one of the most polarising figures in New Zealand sport at the present moment. Firstly I need to state that I do acknowledge Sonny Bill is a phenomenal athlete. He has the skill, he has the ability, he has transcended codes more than once and embarked on a fairly successful boxing career as well.

However I can not list myself among the fans of Sonny Bill Williams, and the breaking news announced by the All Blacks this morning via Twitter has done little to dampen that viewpoint:

BREAKING NEWS – @SonnyBWilliams gets exemption to be selected for end of year tour even if he doesn’t play ITM Cup. http://t.co/Ie48Wokg8t

As a rugby fan I find myself deeply disturbed at the lengths the NZRU has gone to in order to accommodate one player. Especially a player…

Manchester United fans will be rubbing their hands together, or possibly rubbing more private areas, as they read this story.

Real Madrid star Angel Di Maria has reportedly arrived in Manchester ahead of his proposed £64m move to Old Trafford.

The picture, which Marca were first to report, was reportedly taken in Manchester after the Portuguese landed on Monday night.

Manchester United are expected to announce the signing tomorrow after the player completes his medical.

Manchester City were too strong for the Reds seeing them off 3-1 at home. Liverpool would be overwhelmed by the forward play and the attackers were too much to handle by the defence. Both teams started knew the importance of this meeting and after they finished so close to each other last season neither wanted to concede to the other. City would begin slowly and look to feel out the new look defence of Liverpool, who were sporting Lovren and new signing Moreno in the lineup. City went for the same duo up front of Dzeko and Jovetic who were strong in their last game against Newcastle. And it was City that were determined to make amends after losing to the Reds 3-2 in their last meeting. The first half played on and slowly City’s strength up front was causing problems to the defenders and forcing Liverpool to clear their…

The top two teams in England met in Manchester Monday for the biggest game of the week, and although Liverpool was the better team for the majority of the first half, a grave error by new defender Alberto Moreno gave Manchester City a lead just before halftime. Liverpool’s Dejan Lovren was unable to clear a cross out of the penalty area, but headed the ball toward Moreno — who had his back turned to a charging Stevan Jovetić. When Moreno sluggishly whiffed on the clearance, Jovetić pounced and beat Simon Mignolet with a blast from just a few yards away.

Moreno, who just arrived from Sevilla, was making his Liverpool debut. 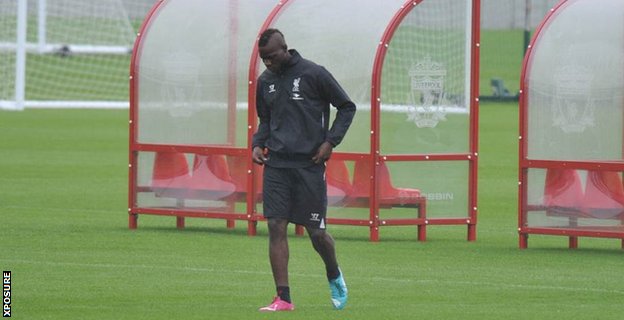 Mario Balotelli has completed his £16 million move to Liverpool from AC Milan.